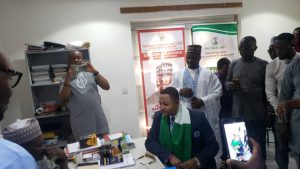 A United States-based Nigerian pastor, Nicholas Felix Nwagbo, has obtained the Expression of Interest and Nomination Forms of the All Progressives Congress (APC) to contest the 2023 presidential election.

Mr Nwagbo, a 40-year-old who is a pastor at Miracle Church International, paid N100 million to obtain the presidential nomination forms of the APC.

Accompanied by his Campaign Director and hundreds of party faithful, the Edo-born [politician obtained the forms at about 4pm on Thursday.

He joined a long list of other presidential aspirants including the Serving Overseer of the Citadel Global Community Church, formerly known as Latter Rain Assembly, Pastor Tunde Bakare, who obtained the APC nomination forms on Thursday.

He described the ruling party as a very prestigious platform and vehicle for federal power in the national interest.

READ ALSO: IGANGAN TRAGEDY: A Year After, We Are Helpless, No Response From Government

Recall that in 2019, Felix came third in the presidential election after President Muhammadu Buhari of the APC and Atiku Abubakar of the People’s Democratic Party, PDP, polling 110,196 votes.